Skip to content Skip to sidebar Skip to footer

Providing adequate health care for a pet monkey can be difficult if not impossible for a private owner!

Primates have unique and complicated health care needs.  Most veterinarians are not  willing or able to provide adequate health care for pet monkeys. To make matters more difficult, attempting to capture and transport a sick pet monkey to a veterinarian, a pet monkey who has become too aggressive for the owner to handle, can be dangerous and nearly impossible!

Our primate veterinarians sometimes partner with human specialists in various medical fields to provide comprehensive medical services to our primates. Macaques are vaccinated with human vaccines such as measles, mumps, rubella, polio and tetanus. (The same vaccine used on human children!) Many human viruses such as chicken pox, and certain cold and flu viruses which are relatively harmless in humans, can be fatal in some primate species!

Because monkeys are primates, like us, they do not latently carry the rabies virus. Because we are in an area where rabies infected wildlife is rare and because our primates do not come into contact with any wildlife, we typically don’t vaccinate for rabies.

Did you know that normal values used for diagnostics in monkey testing is different for monkeys kept primarily indoors than out. And that not all monkey species have the same values? It’s very complicated! That is why it is so important to work with a veterinarian and a lab who understands the variables in non-human primate testing!

Not all primate species are susceptible to the same viruses. There are unique virus testing panels and cultures specifically designed and recommended for primates in each of the following groups: Macaques, Asian species, African monkeys, New World Monkeys and Apes. In addition to the virus panels, a comprehensive stool culture is recommended for all primate species.
OPR volunteer Kayla spends a year in Indonesia, learning about natural behaviors of Black Crested Macaques Monkeys are not humans, but they do share many similar physical characteristics such as pictured in the fetal appearance (left) and unique hand and finger prints.

They share human emotions such as depression, happiness, loneliness, jealousy, anger, love, and grief from the loss of family members or friends. Like humans, monkeys choose their own friends.

Their innocent appearance and human like features when they are infants makes them appealing to those considering a pet. There’s nothing cuter than a baby monkey!

But as monkeys mature, their wild instincts become stronger. They become larger, messier, more aggressive and difficult to safely manage in captivity.

99% of those who acquire an infant monkey will be trying to find a ‘new home’ for their monkey within the first 5 years. Most species can live anywhere from 35-45 years in captivity. The sad reality is that almost every case ends in disaster for both humans and monkey.

In the wild, the sky is the limit for endless acrobatic exploration and play.
It is the “Freedom place” where primates were meant to live out their
lives and to flourish. Polly Schultz 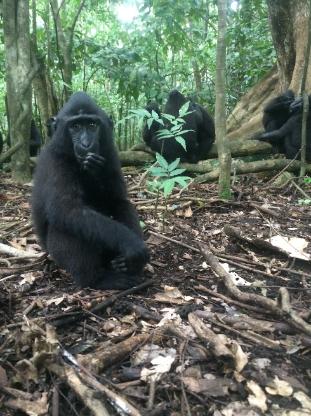 Born to be Wild

Born to be Wild